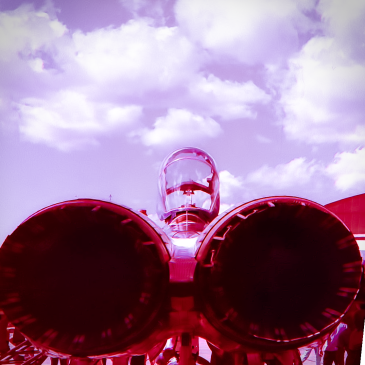 Phillip Lazaro’s thoughts lay upon the sweetness of the cool night air, until the canopy dropped over him and wrung out the last traces of the world outside. Dark, fallow farmland fell away from the runway apron, framed by deep stands of pine, flanked by placid, silver river emptying into the sea.

Numbers chattered in on his headset as systems came up and console operators logged on and cleared The Pod for take-off. The jet’s twin engines howled and the craft wobbled and bounced across concrete until its nose wheel came to a stop at the worn white line at the center of the runway. He stood on the brakes and ran the throttles up. He felt the aircraft rock, as if impatient to be turned loose. He slipped the brakes and let it roll. Exhaust vanes narrowed and flamed electric yellow as the broad concrete slabs of runway slid beneath him and an ever-quickening pace until he reached V2 rotated the nose up and let the F-15 leap into the night sky. He banked on profile to avoid passing over the raggedy little sea on the harbor, then let the jet roar out over the Atlantic.
Five minutes later, still just below Mach One, Lazaro banked again—six miles above the sea, fifty miles down range from High Ground Field. Four green lights rose one after another on the transparent canopy display—up-link, down-link, guidance and target acquisition—and the system took the stick with a stiff, precise hand. He took his feet from the rudder pedals and rested his hands on his thighs as the jet nosed over and hurtled landward.

Artificial horizon rolled left, right. Airspeed ticked upward, altimeter slid smoothly down. A jumble of noise crackled up on the Ground frequency. Distance to target closed rapidly. He thought the engines sounded different―laboring almost. Power in the pod had surged a little early, but they had a hard target lock now.

before he reached for…

as the grey metal wings shot over dark, stony coastline and stars in the canopy winked out in heavy mist.

Fog below took on a dull shine as the river slithered up out of the darkness and white field lights appeared ahead, hurtling toward him through the murk. The radio fell to hissing silence.

Wait for the call.

Hold on and wait.

Altimeter was still winding in on itself.

No good! This is no good!

The ILS cross-hairs sailed up off his display and sent a bank of orange lights into spasm as he seized the ejection handle and for one long split-second pondered what he was about to do, until he drew his legs in against the seat, jerked the handle and felt a tornado vortex tear through the cockpit and hurl him out into the night.

Mike Manion gave an impatient nod and held his watch up to the dim yellow street light. “Look, son, it’s almost eight now. I can’t be creeping around on River Road all night in this fog waiting for you to get it up.” Manion took the toothpick from the corner of his mouth and made soft spitting sounds between his words. “Take your best shot—or just hang it up.”

Sea smoke had settled into low spots in the road up Mill Hill, and the fields and woods along the riverbank, turning parts of this town back in on itself. His trainee, Toby Something-or-other, pulled at the shiny tie knotted around his neck and stared up into the moss-covered faces of the two big marble cats guarding either side of Lions Gate.
“Don’t go talkin’ life policies with this ole lady,” Manion grumbled. “Death doesn’t move old women with no family. It’s nursing homes’ll get ’em thinkin’.” Manion shrugged, satisfied he had imparted enough wisdom and looked at his watch again.

Take your cut, boy, or it’s back to busing tables at Harper’s Grill, somebody else’s tartar sauce under your fingernails.

Toby got out of the car and headed up the long walk. In the darkness of the carriage entrance, he clanged the grimy door knocker and wiped his hand on his pants. Dim light moved into the foyer. He heard the latch clack. He saw the door open. Fluttering light from an oil lamp cast an eerie pallor across the old woman’s face.
It was right then, Toby would recall later, that everything seemed to stop. The wind, the trees, everything—except a powerful swimming sensation in his belly. His guts jumped like cold water on a hot griddle. The old lady’s face took a peculiar twist. The lamp wobbled. Hair bristled on the back of his neck.

At the street, Manion was picking his teeth with the Ford’s ignition key and squinted with curious irritation when his dash lights began glowing in a dim, pulsing cycle. He looked at the key and then down at the empty ignition switch. The sky overhead took on a crazy magenta hue and the air prickled his skin like a bolt of lightning was about to strike him square between the eyes. He looked up the walk and saw the old woman swoon and crumple onto the flagstone, her oil lamp tumble past the kid, fire flash into the ragged grass and reflect in the vibrating windows of the house.

Toby tried to lope back toward the car as something large shot over their heads and the air compressed, shuddered and split open with a mind-numbing roar. The concussion threw him down at the Lions Gate. A flash lit up the trees beyond, making the sea smoke shimmer like mercury. A fireball rose from the woods and the ground trembled beneath him. Toby lay on the walk in a dazed state until distant sirens mixed with the ringing in his ears and the growing fire turned the night to an orange twilight. He struggled to stand as someone took his arm and sat him on cool granite steps.

George Milligan felt the whole store shake and turned toward the window that looked up Mill Hill. He saw a flash against the sky and in a few moments a hungry orange light that rose above the mansion. He stood transfixed, until the fear in Tavie’s voice broke the spell. “What was that, George?” she said, from the arm chair in the anteroom behind the counter. A young man in faded work clothes stood in front of the register, a liter of cheap vodka in each hand.

“You feel that?” George asked.

The young man looked at him dully, with a lazy shake of his head.

Another vapid look. The kid clunked the bottles onto the counter and peeled a crisp fifty off a sizable wad. George rang him out, and stood at the register until his customer had left, then turned the lock on the front door, pulled the shade and flipped the closed sign over in the window.

“Got the water on already,” he shouted back over his shoulder. “Got th’ Epsom salts and th’ tub. You just sit. What the hell would you do without me lookin’ after you?”

George let the water warm just a bit—not too hot—and poured it over his hand into the tub. Tavie eased in one foot, then the other and drew in her breath. “You’d curl up and die, I ‘spect.” George grumbled. “Your feet never been right since that goddam mill.”
“And you’re deaf as a stone in that one ear, George. The mill kept us both from starvin’ to death.”

He carried the kettle back to the stove, stopping again at the window. There could be no mistake about the orange light against that old bitch of a house. And there was a good wind tonight, coming in from the sea.
Yessir. My God is a destroying fire.

But a storm of red and blue strobes swerved off Route 1A and up River Road.
Those damn fools can’t mean to save it? Not when it’s burning good all on its own. Let it go!

He looked back and saw Tavie relax her grip on the arms of the chair. Twelve feet of gauze she had to wrap around her feet every working day at Brandt Mills to keep the heat from the oak floorboards under the silk machines from frying her flesh. “Yessir,” George said in a low hiss.

“Are we still on that old dead mill, old man?”

“Like those girls up in the office used to say. Every time Brandts made big donations up to the college somebody got cut at the mill.”

“A minute ago, you were cursing working there. Rub my feet.”

Margaret closed her eyes and felt faint, then forced them open to stop the spinning in her head. Bailey dropped to the floor, moved toward the window at first, then doubled back under the bed as the room recoiled from the concussion further up the hill. The window glass glowed orange. Margaret slipped onto the floor with him, her cheek pressed to the hardwood.

The room glowed red as she slid under the bed and she felt Bailey scoot tight up against her in the dark. She slid out the other side and stumbled down the stairs, with the beagle close behind. Outside, he slipped around her feet and ran to the safety of the lilac hedge. The trees atop Mill Hill glowed with an angry orange hue against the night sky. The house was a looming silhouette against a towering bonfire.
Margaret ran through the garden towards the rising conflagration, stumbled and thrashed through a tangle of brush near the house. She felt the heat on her face as she drew closer and found Esther limp and still on the stone walk at the carriage entrance. Fire consumed the grasses beyond her in a rush of hot wind. The old woman looked dead, but stirred at Margaret’s touch. Meg helped her up and led her toward the street and the steps at the Lions Gate. She sat her down, then went to the aid of a dazed young man lying just inside the gate.

There was fire beyond the house, as well. Fire well back into the woodlands over the crest of Mill Hill. Through it all―incredibly―the great house stood untouched as all around it withered and burned.

People began to come up Mill Hill on foot, on bicycles, in pickup trucks, four-wheelers and cars. They lined the wrought iron fence with skeletal grips and ghostly stares. First one old man had appeared, standing alone at the fence, then two more, then two dozen. Within a half-hour two hundred people stood, watching, waiting, some praying. An old man approached them as an EMT attended to Esther. He stood near them, staring in silence for several moments until Margaret thought he was about to speak, then he slipped away, back into the crowd.